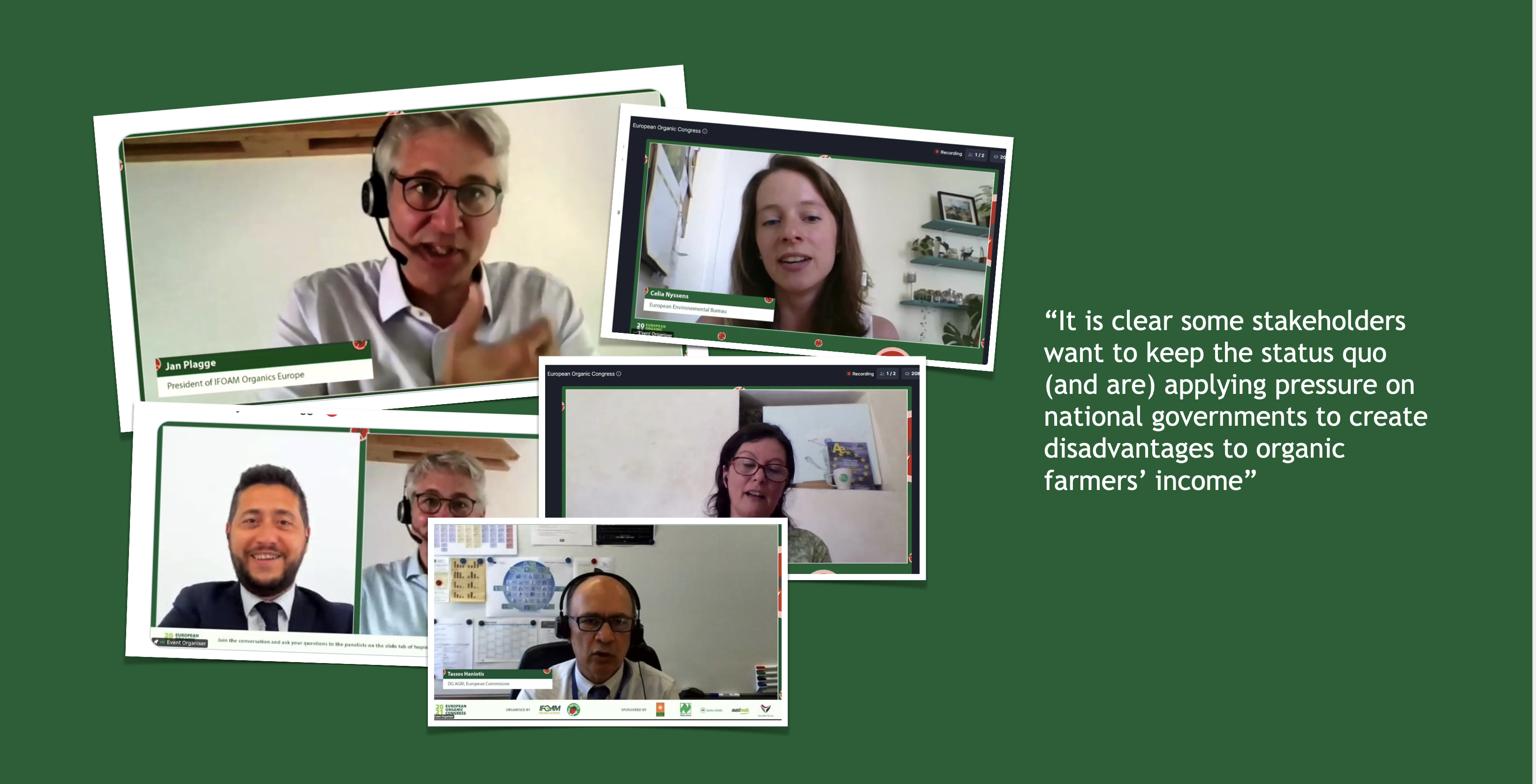 Senior European organic and environment figures warned this week that a ‘pushback’ from conventional food and farming interests now poses a serious threat to the EU’s target to have 25% of farmland across the bloc under organic systems by 2030.

In the opening session of this week’s European Organic Congress, speakers and participants highlighted mounting pressure on Member States from food and agribusiness groups to maintain ‘business as usual’, with the result that some countries now appear to be “trying to find ways not to meet organic targets”.

In the session – The new CAP and EU Green Deal: How far apart? – panellists were asked to assess if the new EU Common Agriculture Policy (CAP) and national responses through the proposed CAP Strategic Plans are in line with the EU objectives of the European Green Deal, in particular the target to reach 25% organic land by 2030.

Jan Plagge, president of IFOAM Organics Europe (co-organiser of the Congress, with Agrobio), acknowledged that the political process (for advancing the ambitious green policies contained in the Green Deal initiatives) was “difficult” at the EU level, but said that at the Member State level there were clear opportunities to take action. He pointed out that 20-30% of the total CAP budget had been ring-fenced for eco-schemes, making it comparatively straightforward for Member States to calculate their spending on organic farming to achieve EU Farm to Fork and Biodiversity strategies.

It’s not so complicated to establish what is needed to be done in the next seven years to meet the EU organic land target … and organic is a proven and successful system for transforming our food and farming system towards sustainability, protecting biodiversity and tackling climate crisis”

He said: “It’s not so complicated to establish what is needed to be done in the next seven years to meet the EU organic land target … and organic is a proven and successful system for transforming our food and farming system towards sustainability, protecting biodiversity and tackling climate crisis.”

There were examples of good progress at the the national level – Denmark and Sweden, for example, which were being aided by “strong policy support and leadership at the national government level”.

But Plagge said that a worrying picture was emerging in some other countries where “it is clear some stakeholders want to keep the status quo (and are) applying pressure on national governments to create disadvantages to organic farmers’ income”. He cited France as an example, where organic groups recently warned they are set to lose 66% of financial support under current CAP Strategic Plan proposals.

Other panellists also warned that organic groups were being effectively shut out of the Strategic Plan process. Aina Calafat Rogers from the Spanish organic farming body SEAE (and deputy council member of IFOAM Organics Europe) told the Congress that “the organic sector in Spain wasn’t involved in the consultation process on the design of the Spanish Strategic Plan, only representatives of three conventional agricultural organisations and environmental NGOs”. She said Spain was seeing similar issue to France, with a concerted “pushback here to keep the status quo”.

Celia Nyssens, policy officer for agriculture at the European Environmental Bureau, said that targets were a useful “first step towards change” but if they remained as mere political ambitions they would be ineffective. She said the targets in the Farm to Fork strategy – including the 25% organic goal – should be made “binding and integrated into the future of the CAP and EU law”. She added: “The current proposal is funding business as usual, rather than climate and organic goals.”

“Forget about the status quo. The status quo doesn’t exist. There is no monopoly of these practices anymore”

But Tassos Haniotis, director for strategy, simplification and policy analysis at DG AGRI, advised the organic sector not to become preoccupied with budgets and targets, and focus instead on “value added”. And, he said, bluntly: “Forget about the status quo. The status quo doesn’t exist. There is no monopoly of these practices anymore.”

• In his Congress wrap-up, earlier today, Jan Plagge said: “Our colleague Tassos, who is closely involved in the negotiations and drafting of the commission’s proposals…clearly said that the member states have to deliver with the strategic plans. But from our observations – earlier, we presented early findings from our survey of Member States – Members States are not willing to deliver, and not willing to take serious planning measures for the further development of organic land, organic markets, bio-districts – or whatever measures are needed to reach the Farm to Fork targets. This is just not happening at this time.

“We need to see a strong alliance between the European Commission, the organic sector and from the engaged people in the regions and in the member states, to take the measures for organic farming inside the Strategic Plans as an obligation.”