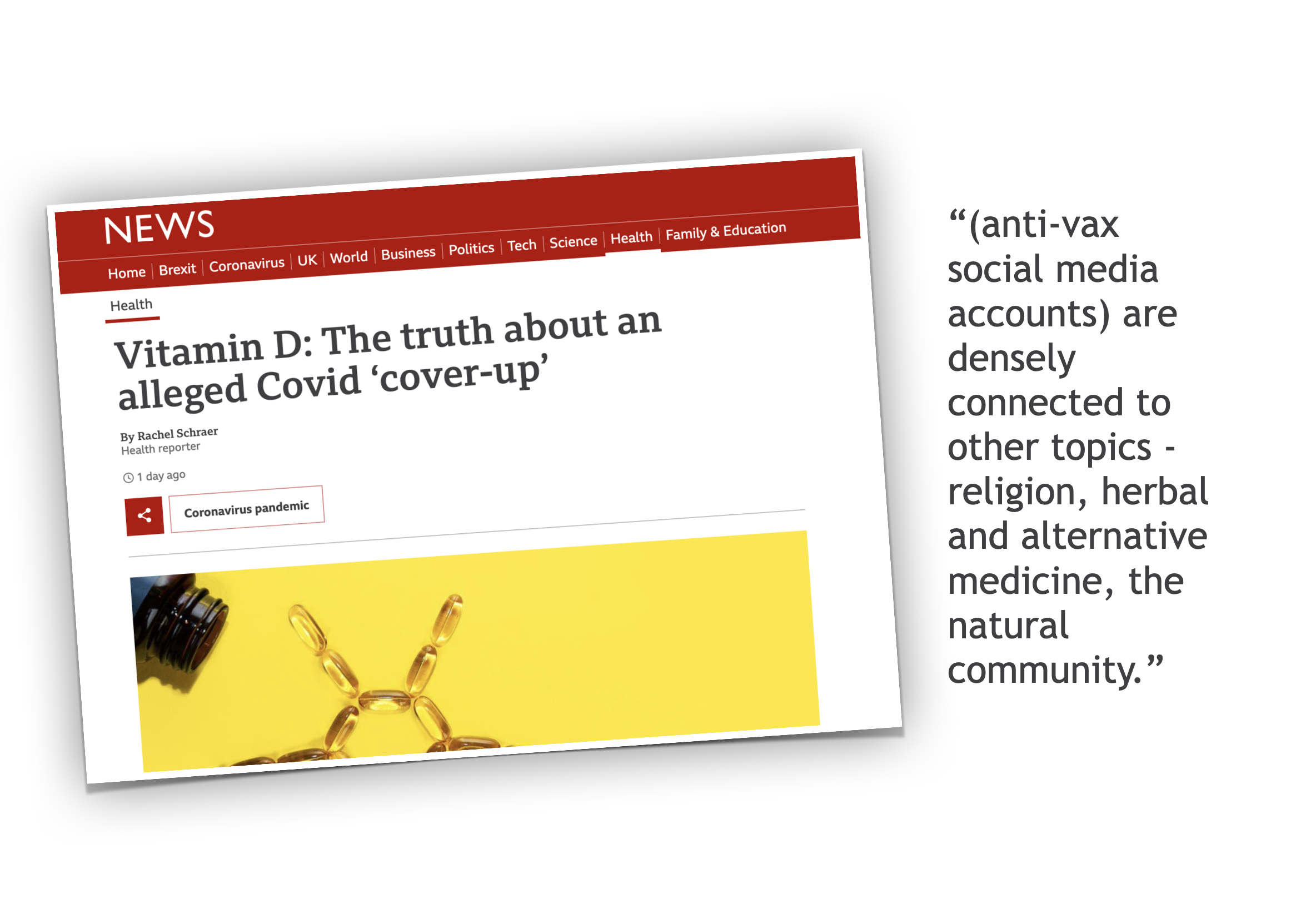 Professor Sander Van der Linden, a social psychologist at the University of Cambridge (and specialist in online disinformation), told the BBC reporter Rachel Schraer this week that anti-vax social media accounts are “densely connected to other topics – religion, herbal and alternative medicine, the natural community.”

While acknowledging that the online worlds of natural health and alternative medicine, and of people who are ideologically anti-vaccination are distinct, professor Van der Linden says that these ‘world views’ often appear to overlap.

This, he tells Schraer, means that anti-vax accounts can share topics that will intersect with people in those communities’ interests “and spread a message that, for example, you don’t need a vaccine (for Covid), you can just take vitamin D without it being overtly flagged to someone that the message is anti-vax when it appears on their feed”.

The main focus of Schraer’s article is on claims that the effectiveness of natural approaches to treating and preventing Covid-19, in particular vitamin D therapy, are being downplayed by Governments and medical authorities.

Schraer, a BBC health reporter, asserts that “while here is some logic behind why vitamin D might be useful in treating or preventing Covid…so far, no research has shown a convincing enough effect to support higher doses to prevent or treat illness”.

She says that while “many studies have shown an association between vitamin D and Covid outcomes” that the evidence is “largely observational” and almost all studies to date lack the gold standard evidence…(of) a randomised control trial. The article notes that one study – conducted by the University of Barcelona – that was presented as an RCT has been withdrawn by the Lancet following criticism that patients in the study did not appear to have been randomised.

The Barcelona study found that vitamin D therapy in hospitalised Covid patients cut the risk of ICU admission by an astonishing 80% and and death by 60%. These findings made headlines worldwide and were tweeted tens of thousands of times. Schraer says that the retraction “was not shared in the way the original paper was”.

Aurora Baluja, an anaesthesiologist and critical care doctor in Spain, who reviewed the Barcelona study for the Lancet before it was withdrawn, told the BBC that “extreme” effect found in the Barcelona paper was “never found” in a randomised controlled trial, and was “highly likely” to be the result of bias.