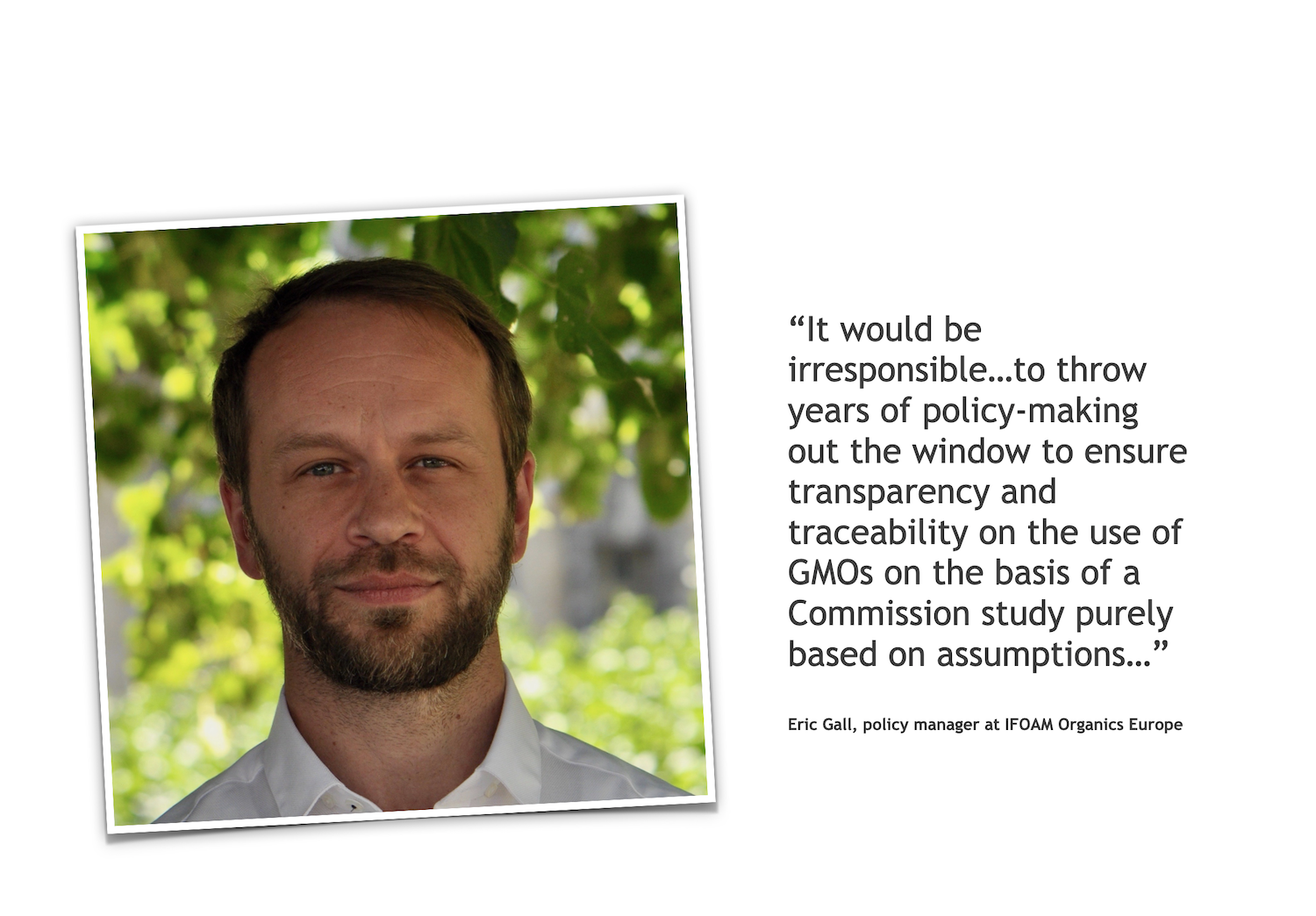 The organic food and farming sector has warned that European Commission proposals to exempt new genome editing techniques from current EU GMO laws would leave organic “unprotected” and “contradict the objectives of the EU’s flagship Green Deal and the Farm to Fork strategies”.

Yesterday, the Commission published a study asserting that new genetic modification techniques, which it groups under the term ‘New genomic Techniques’ (NGTs), “have the potential to contribute to a more sustainable food system as part of the objectives of the European Green Deal and the Farm to Fork Strategy“. At the same time, the study argues that current GMO legislation, adopted in 2001, is “not fit for purpose for these innovative technologies”.

Red flag
“Raising a red flag on the assumed benefits (of) deregulating new genomic techniques”, IFOAM Organics Europe yesterday called on member states and the Commission to “safeguard the capability of producers and farmers to produce without GMOs and allow consumers to choose what they eat”. It added: “The existing regulation is fit to achieve these goals and already allows research on and marketing of GMOs if the applicable rules are respected”.

Jan Plagge, IFOAM Organics Europe president said: “A weakening of the rules on the use of genetic engineering in agriculture and food is worrying news and could leave organic food systems unprotected – including their ability to trace GMOs throughout the food chain to avoid contaminations that lead to economic losses and to live up to organic quality standards and consumer expectations. Organic producers urge the Commission and Member States to maintain the existing regulatory framework and seriously consider the impact of the proposed regulatory scenario on organic food & farming, consumer choice and access to agrobiodiversity.”

IFOAM Organics Europe says that transparency on the use of genetic modification should continue to apply all along the food production chain. Contrary to the study’s outcomes, it says, “weakening the regulation of these technologies would actually contradict the objectives of the EU Green Deal and the Farm to Fork and Biodiversity strategies, as well as the European Court of Justice ruling which states that this new generation of genetically modified organisms must be regulated under the EU’s existing GMO laws”.

Irresponsible
“It is baffling that the Commission envisages to jeopardize the development of existing agronomic solutions put forward in its own Farm to Fork strategy to make room in agriculture and food production for genetic modification technologies with at track record of unfulfilled promises”, said Eric Gall, policy manager at IFOAM Organics Europe. He continued that “it would be irresponsible for Member States to throw years of policy-making out the window to ensure transparency and traceability on the use of GMOs on the basis of a Commission study purely based on assumptions on the ‘potential benefits to society’ of new genetic engineering technologies and their contribution to the Farm to Fork strategy’s objectives.”

The organic advocacy groups warns that “promises of producers to use the technology to create alternatives to pesticide-tolerant crops should be treated with caution”. It points out that first application in the EU for approval of a CRISPR/Cas plant is a herbicide-resistant maize. And it argues that “mere promises of expected benefits do not justify a weakening of the EU’s standards with regard to environmental protection and farmers’ and consumers’ choice”.

Silver bullet solutions
IFOAM Organics Europe says “rather than depending on and hoping for silver bullet solutions such as GM crops, the Commission’s focus should be on upscaling concrete and well-defined agroecological practices with proven benefits for biodiversity and soil quality”. It adds that organic farming is already implementing a wide range of practices to make our food and farming systems more resilient to pests and diverse environmental conditions, as well as extreme weather events linked to climate change while reducing the dependency on synthetic pesticides.