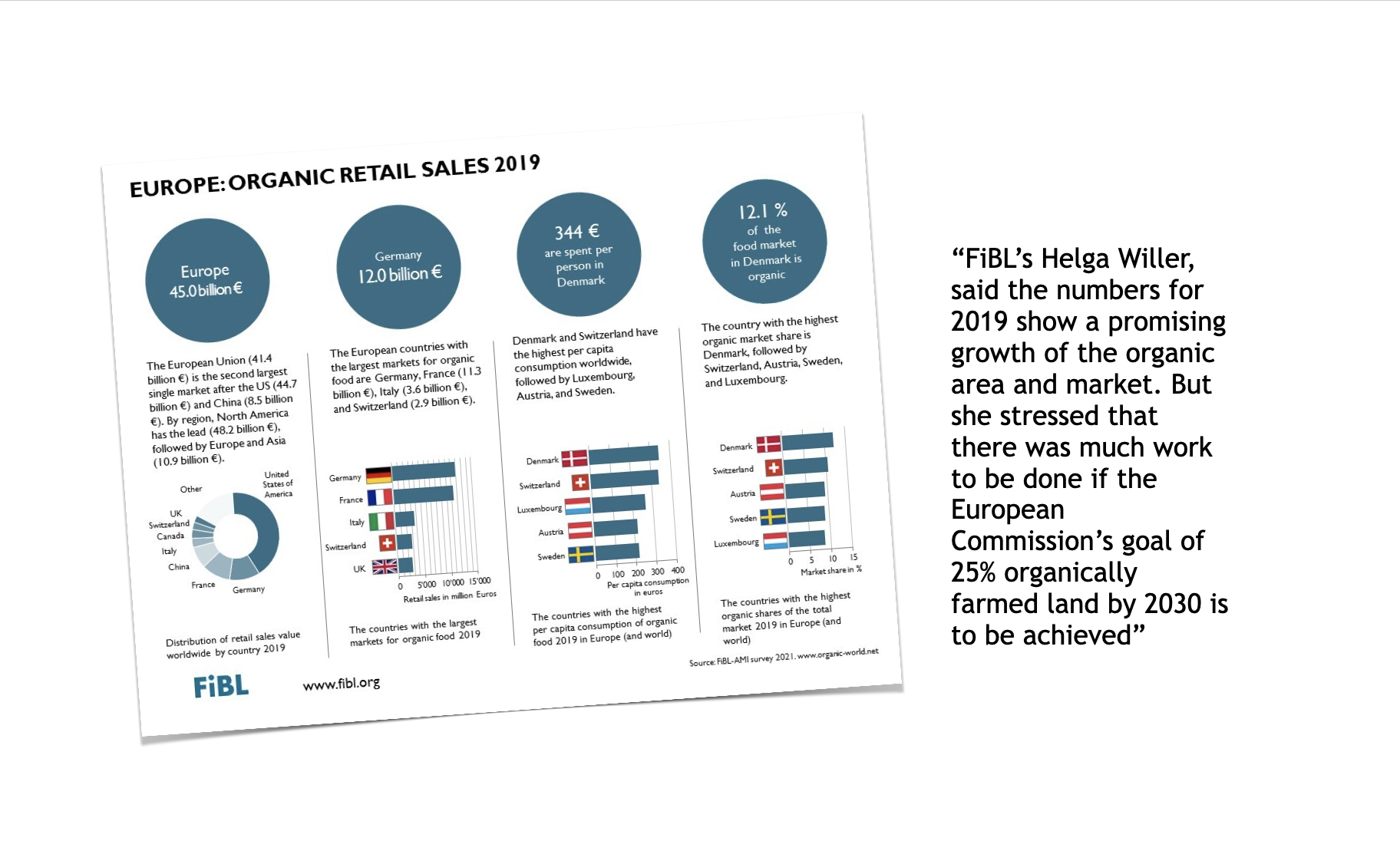 The European organic market grew 8% in 2019 to be worth €45 billion according to the latest edition of the The World of Organic Agriculture report published today jointly by FiBL and IFOAM – Organics International.

But organic leaders say more work – and political will – are needed if the EU bloc is to achieve its ‘25% organic by 2030’ target.

Publication of the report is timed to coincide with the first day of the 2021 Biofach event, which takes place this year as an ‘eSpecial’.

Retail sales reach €45.0 billion
Retail sales in Europe were valued at €45 billion (€41.4 billion in the European Union). The largest market was Germany (€12 billion). The European Union represents the second largest single market for organic products in the world after the United States (€44.7 billion).

France set the pace in 2019
The European market recorded a growth rate of 8.%. Among the key markets, the highest growth was observed in France (13.4%). In the decade 2010-2019, the European and European Union markets’ value has more than doubled.

More work to do
Helga Willer, responsible for data collection at FiBL, said the numbers for 2019 show a promising growth of the organic area and market. But she stressed that there was much work to be done if the European Commission’s goal of 25% organically farmed land by 2030 (set out on its Biodiversity and Farm to Fork strategies) is to be achieved.

Eduardo Cuoco, director at IFOAM Organics Europe, said that meeting this target would require “political support at all levels”. Elaborating, he said: “This includes a good regulatory framework, adequate support under the CAP – with clear support for organic in the national strategic action plans – and a powerful European Organic Action Plan with concrete actions supporting conversion, market development and capacity building of the European organic sector. We will work closely with all the stakeholders to develop tools to measure and support organic growth.”

Pandemic fuelled growth
Diana Schaack, a market analyst at AMI, added: “We are already looking forward to the consolidated market data for 2020. Last year the organic market in many countries exhibited accelerated growth due to the pandemic. If this trend sustains, production and processing have to keep pace. The Farm to Fork strategy of the European Union can support this development with respective measures.”

FiBL and AMI conducted the survey on organic farming in Europe. The FiBL data collection was carried out in the framework of the global survey on organic farming supported by the Swiss State Secretariat for Economic Affairs (SECO), the International Trade Centre (ITC), the Coop Sustainability Fund, NürnbergMesse and IFOAM – Organics International.