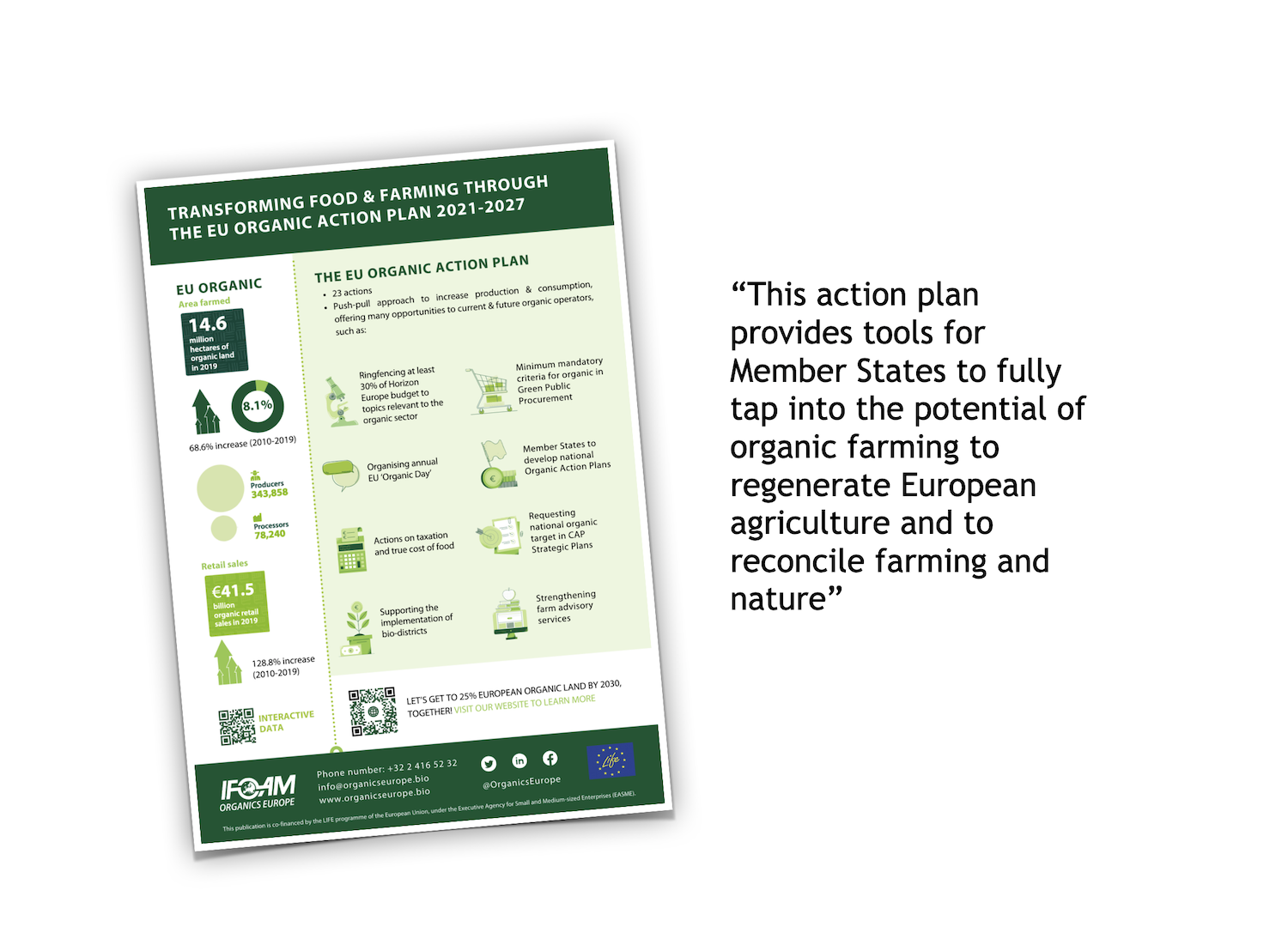 IFOAM Organics Europe says it welcomes the “push-pull” thrust to the new European Organic Action Plan 2021-2027, with its aim of balancing increases in both production and demand of organic products.

The Action Plan was launched yesterday at a press conference led by the EU Agriculture Commissioner, Janusz Wojciechowski.

The European Commission says the Action Plan will provide the “right tools” to help the bloc reach its stated ambition to have 25% of EU farmland under organic systems by 2030.

Jan Plagge, Ppresident of IFOAM Organics Europe welcomed that “the EU Farm to Fork and Biodiversity strategies put organic farming at the heart of a transition to sustainable food systems, with a target to reach 25% organic land on average by 2030 and with the publication of a new EU organic action plan, which will mark a new era for the transformation of our food systems towards organic and agroecology”.

Concrete steps
He added that “the Commission has put forward concrete steps to boost organic demand such as the €49 million budget for organic within the promotion policies framework as well as the integration of organic products into the minimum mandatory criteria for sustainable public procurement. Given the importance of knowledge in organic food systems and the role that organic practices play in the internalisation of external costs, allocating at least 30% of the Horizon Europe funding for agriculture, forestry and rural areas to topics relevant for the organic sector, as well as carrying out a study on the real price of food and the role of taxation are timely steps forward”.

Plagge said he was looking forward to the annual EU ‘Organic Day’ – one of the promotional initiatives contained in the Plan – which he said would create “an ideal opportunity to take stock of how the organic action plan is performing”.

Tapping into organic’s potential
Eduardo Cuoco, director of IFOAM Organics Europe said that “we must not forget the importance of the involvement of national, regional and even local actors for this action plan to be as successful as possible in reaching the 25% organic target and transitioning towards more sustainable food systems. This action plan provides tools for Member States to fully tap into the potential of organic farming to regenerate European agriculture and to reconcile farming and nature. Specifically, involvement beyond the EU level is vital for actions related to public procurement, promotion, the implementation of bio-districts, to name but a few”.

Speaking about the CAP, Cuoco said that “this action plan now needs to be implemented by Member States through their national CAP strategic plans. Therefore, the organic movement welcomes that the Commission will ensure Member States make the best use of the possibilities offered by the new CAP to support their national organic sector and that farm advisory services will be strengthened.  It is time to properly reward organic farmers as well as conventional farmers transitioning to organic for the benefits they deliver to nature and society, and to properly fund farm advisory systems geared towards organic and other agroecological practices”.