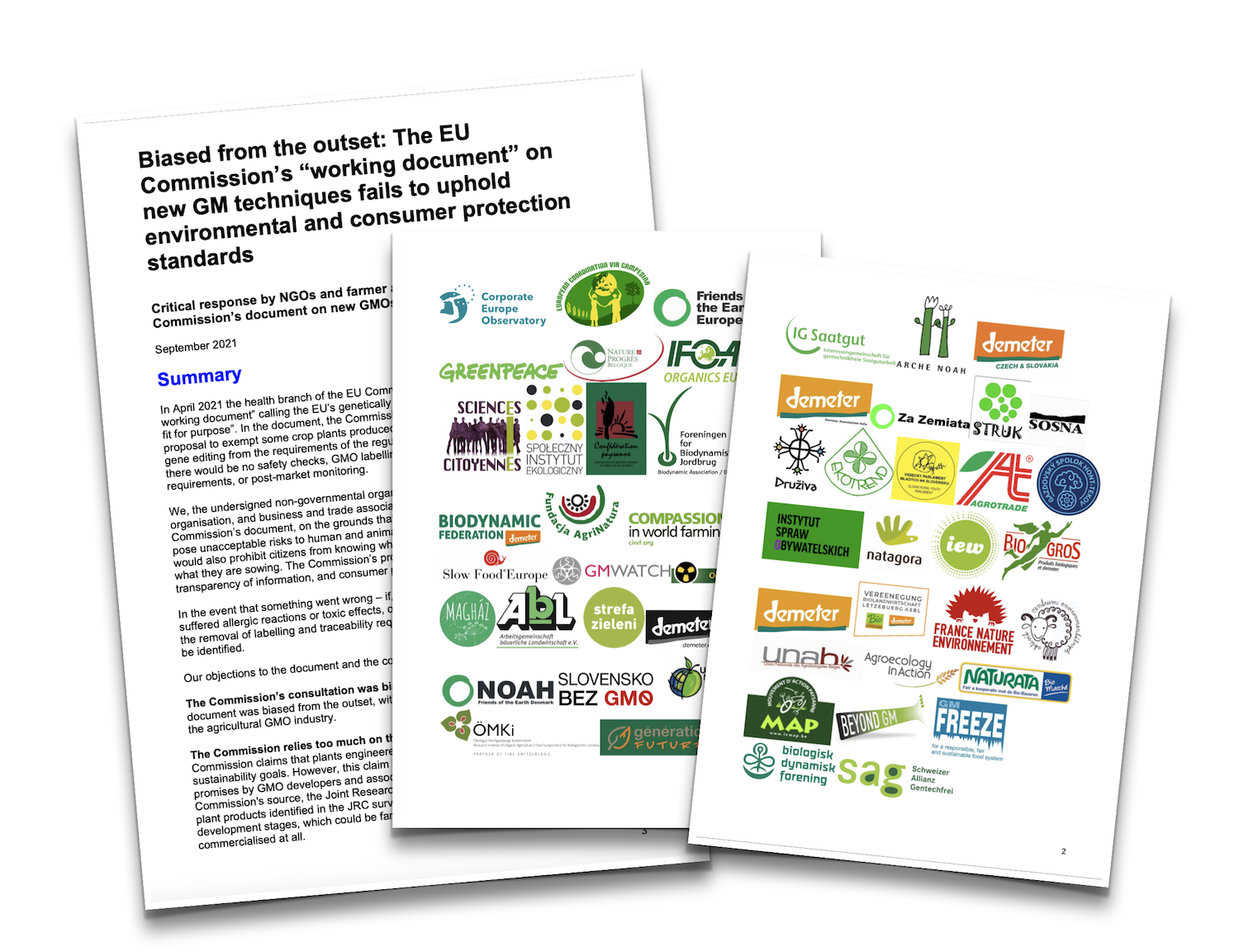 A recent report published by the European Commission urging an overhaul of EU GMO regulations – potentially opening the door to controversial new gene editing techniques – has been branded “biased from the outset” in a response sent to the commission by 57 NGOs, farmers associations and trade bodies.

In April, the European Commission’s health division DG SANTE published a “working document” in which it announced that the EU’s GMO regulations are “not fit for purpose”. The Commission made suggestions that could lead to crop plants produced using experimental new GM techniques such as gene editing being exempted from the requirements of the regulation. This, critics warn, could mean that these crop plants would not be subjected to safety checks, GMO labelling, or traceability and monitoring requirements.

Now 57 groups, consisting of non-governmental organisations (NGOs), a peasant farmer organisation, and business and trade associations, have sent a response to the Commission,* strongly opposing its plans on the grounds that “deregulation of new GM techniques would pose unacceptable risks to human and animal health and the environment. Deregulation would also prohibit citizens from knowing what they are eating and farmers from knowing what they are sowing.”

The groups, 51 of which are EU-based and six in non-EU countries within the European continent, add, “The Commission’s proposals cross red lines regarding biosafety, transparency of information, and consumer protection. They should be rejected.”

The groups’ response lays out a series of objections to the Commission’s plans, including:

• The consultation process that led to the Commission’s document was biased from the outset, with the vast majority of inputs (74%) coming from the agricultural GMO industry.

• The Commission relies too much on the unverifiable promises of the industry, accepting claims that new GMOs could contribute to sustainability without any evidence to back them up.

• The Commission ignores a large body of scientific evidence and analysis pointing to the risks of new GM techniques. Gene-editing techniques are not precise and can cause unintended changes with unpredictable consequences – potentially including unexpected toxicity or allergenicity.

• The Commission uncritically follows the GMO industry’s “wish list” for deregulation, even when this means contradicting up-to-date science showing that gene editing can produce changes that would be extremely difficult or impossible to achieve in conventional breeding and that therefore carry unknown risks.

• Deregulation of new GMOs would leave consumers and the environment unprotected. Existing alternative laws, such as those governing food and environmental protection and seed quality, do not provide for a health and environmental risk assessment.

•The Commission falsely claims that new GMOs cannot be detected, in spite of evidence that identification of plant varieties is already being done using biochemical and molecular techniques.

* New GM techniques must be kept under the existing GMO regulations, which must not be weakened but strengthened (via additional risk assessment guidance) in order to maintain and improve protections for human and animal health and the environment.

* The EU Commission and governments should step back from promoting and deregulating the new generation of GMOs and instead prioritise public and political support for sustainable farming systems like agroecology and organic farming.

* The Commission should mandate the development and application of already available biochemical and molecular plant variety identification techniques to detect all known new GMOs entering the marketplace.

According to Agrafacts, “Sources indicate there is a tentative 4-year horizon to exempt targeted mutagenesis techniques and cisgenesis techniques (deemed as the most safe) from the GMO Directive. A 10-year horizon is seen as the most likely option to regulate all the other NGTs, based on a case-by-case risk assessment. The Commission is seeking to drive a ‘balanced discussion’, industry sources say, while keeping in mind labelling and traceability requirements.”

GMWatch editor Claire Robinson, who helped draft the NGO response based on the collective input from many of the NGO signatories, commented, “The Agrafacts report shows that the Commission is continuing to ignore the scientific and technical realities of new GM techniques. There is zero evidence that gene editing and cisgenesis are any safer than older-style transgenic genetic engineering techniques (where genes are artificially transferred between unrelated organisms) – and plenty of evidence that they could pose serious risks to health and environment.

“There are also strong reasons why it is crucial to maintain labelling and traceability requirements, such as preserving consumer and farmer choice and the ability to identify new GMOs in case something goes wrong. But the Commission appears to get its information primarily from a small group of professional lobbyists with vested interests in promoting GMOs, while ignoring the valid concerns of broader society and independent scientists.”

Commenting (on LinkedIn), IFOAM Organics Europe (another signatory), said: There’s no scientific basis for deregulating whole classes of new GM techniques & products. EU laws on food, environment and seeds do not guarantee a level of protection comparable to that of genetic engineering law neither individually nor collectively